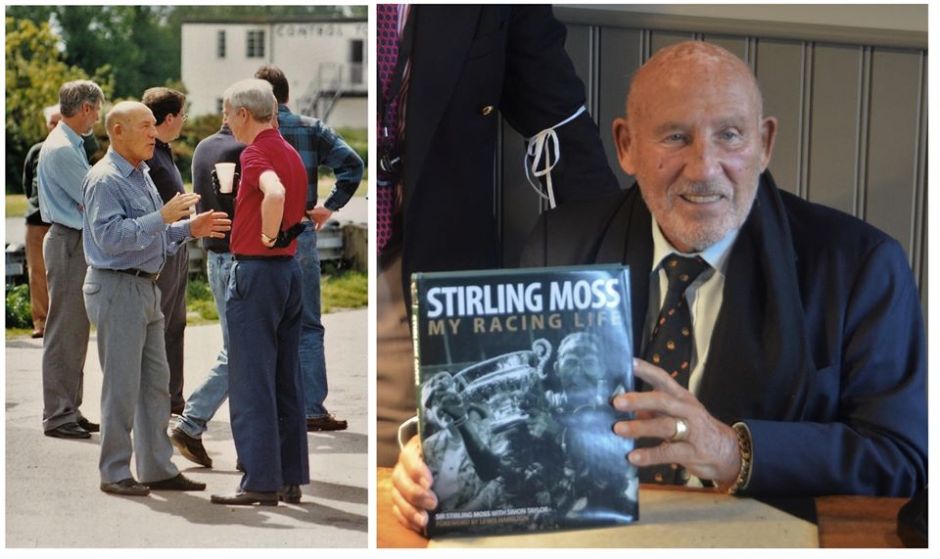 I grew up quite a while after Sir Stirling Moss had stopped racing, yet his was still the name in general currency for references to motor sport. Therefore I consider myself fortunate to have seen him drive at various events, and extremely fortunate to have met him three times. It is a measure of the strange arc my life has taken that some of you reading this, friends on Facebook, will have known him very well. However, perhaps those who didn’t know him may be interested in my experiences.

The first time was at some club or corporate gathering that I chanced across at a pre-restored Goodwood circuit. Moss and Tony Brooks were obviously the star attraction and were taking the 15 or so punters around the circuit for hot laps. I dashed home, banged out 3 very quick drawings and dashed back. Both men were very considerate, taking a moment from their professional duties to sign my pictures and I recall we had a short, friendly chat before I thanked them and made my exit. Although it was so long ago I still remember the feeling of having been completely at ease in their presence, there was no sense of ego or preciousness about them at all. Of course this immediately elevated both even further in my estimation.

The second was at an almost deserted circuit, with plastered leg and crutches just after he had broken his leg falling off his moped. Me being me, I wandered up and struck up a conversation; asking what was going to happen as driving the Mercedes at the Festival of Speed in a few weeks time was being touted as one of the star attractions. His reply was “Well, I’ve been thinking about it and if I ask the doctor to reset my knee at a different angle I think I can twist in the seat and get down on the pedal”. I’m pretty sure we both laughed, I’m also pretty sure he was quite serious. It honestly felt like I’d simply bumped into a vague acquaintance and was stood talking about the weather, not being granted the rare opportunity of a private conversation with a hero.

The last time was at the 2016 Goodwood Revival when, even then, he clearly wasn’t well. I had been “dropped in it” by, at a moments notice, having to take over an afternoon of interviewing Derek Bell, Brian Redman and Sir Stirling in turn. Obviously I didn’t mind in the least but, having an hour or so with each and being completely unprepared, I was flagging a bit when I came to Moss. Thankfully Simon Taylor was with him and when he saw I was struggling started feeding questions along the lines of “Perhaps you’d like to know Sir Stirling’s view on…?” I can’t have made a very good impression but he still carried gamely on and treated me with courtesy and patience until Susie, wife and guardian angel, whisked him away so he wouldn’t get too tired.

90’s not a bad age at all, its rather formidable when you consider the crash in 1962 came so close to killing him. For me Sir Stirling Moss was a legend growing up, one of those detached other worldly people you speak of excitedly or occasionally see on television leading an impossibly glamorous life – a hero. As I got know him, just a little bit, he became approachable, human, grounded and, perhaps most importantly, a thoroughly nice fellow. He remains forever a hero. RIP.